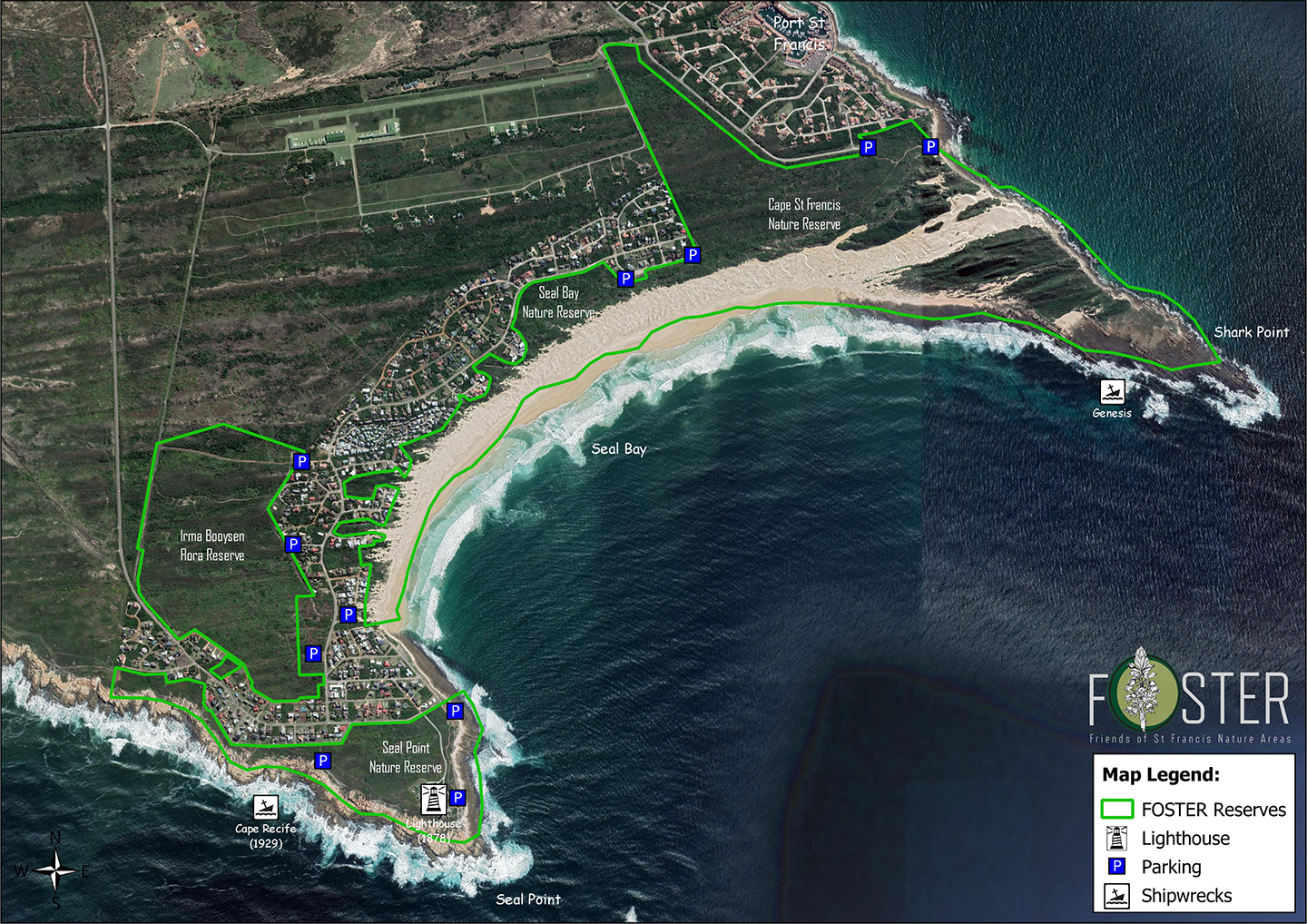 The Seal Point Nature Area includes the land on either side of the road approaching the Lighthouse and extends all along the coast to the western boundary of the Cape St Francis village at Sunset Rocks.

The Seal Point Nature Area includes the land on either side of the road approaching the Lighthouse and extends all along the coast to the western boundary of the Cape St Francis village at Sunset Rocks.

The Irma Booysen Flora Reserve comprises the broad area between the main road leading into Cape St Francis (R330) and the village itself.

The Seal Bay Nature Area is found in the heart of Cape St Francis village lying about half-way along Da Gama Rd, between Drake Place & Shearwater roads and extends down to the sea.

St Francis region is mixture of fynbos and subtropical thicket plants – hence its name: St Francis Dune Fynbos-Thicket Mosaic. It grows on coastal dune sands from beyond Oyster Bay in the west, to Cape Receife at Gqeberha (Port Elizabeth) in the east. The vegetation of the coastal dunes of the Greater St Francis area has the highest possible conservation status owing to the high levels of endemic biodiversity, and the threats this biodiversity faces from urban expansion and alien plant invasions. For these reasons, three biodiversity sector plans, namely Eastern Cape Bioregional Plan, Eastern Cape Parks and Tourism protected area expansion strategy, and the Garden Route Initiative list our veld as a Critical Biodiversity Area. This means that no further habitat loss will be tolerated without detailed plans to mitigate the impacts.

The soils are sandy and alkaline, owing to the high content of shell particles.

The Fynbos/Thicket Mosaic comprises five related veld types. The vegetation forms a mosaic of fynbos and thicket patches. Proteas are absent from the fynbos but restios are well represented by the ubiquitous slangriet (Ischyrolepsis Eleocharis) and besemriet (I. leptoclados). Ericas (Ericoids) are also common, although with the exception of the delightful Erica chloroloma, true ericas are quite rare.

Thicket differs fundamentally from fynbos in all respects. Firstly, unlike members of fynbos, thicket plants are not adapted to benefit from fire. While many can resprout after fire, their recovery is slow. Moreover, successful seedling establishment – invariably from bird-dispersed fruits – occurs in the periods between fires, and not immediately after fires, as is the case for fynbos species.

Thicket plants are also extremely long-lived, surviving for many hundreds of years, whereas most fynbos plants start losing vigour if unburnt for between five and thirty years, depending on the species. While fire is essential for maintaining the health and diversity of fynbos, it suppresses thicket. Hence, thicket is most common in areas that are relatively fire-free, such as deep kloofs, rocky outcrops and along the coast where fires can only spread from inland areas.

Thicket plants are also more nutritious than fynbos shrubs to browsing animals such as bushbuck. Therefore, many thicket shrubs are armed with vicious spines that slow down the rate at which their leaves and stems are eaten. The nutritious foliage, along with the cool and dry conditions beneath the dense thicket canopy, contributes to the development of the organic-rich soils of the thicket floor (so called black or bush soil).

Our area has a great diversity of wetlands, each with a different component of species. The delightful coastal seeps wetlands with water pimpernel (Samolus porosus) and sea lavender (Limonium scabrum) along the wild side plays an essential role in maintaining the rich diversity of our landscapes. 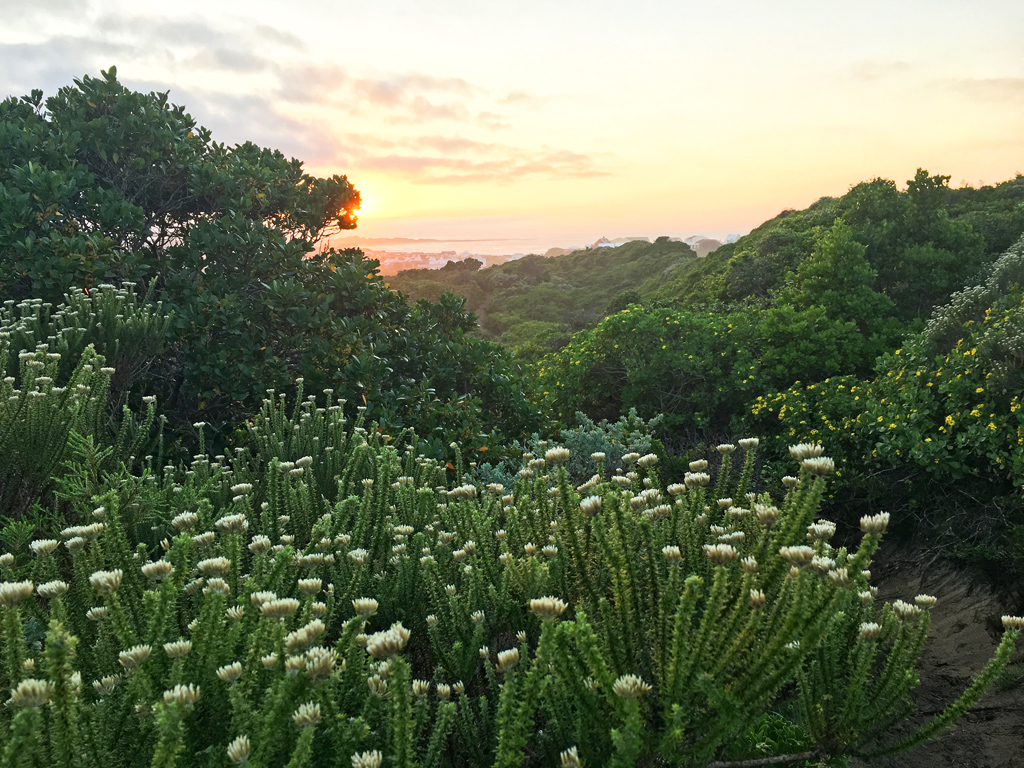 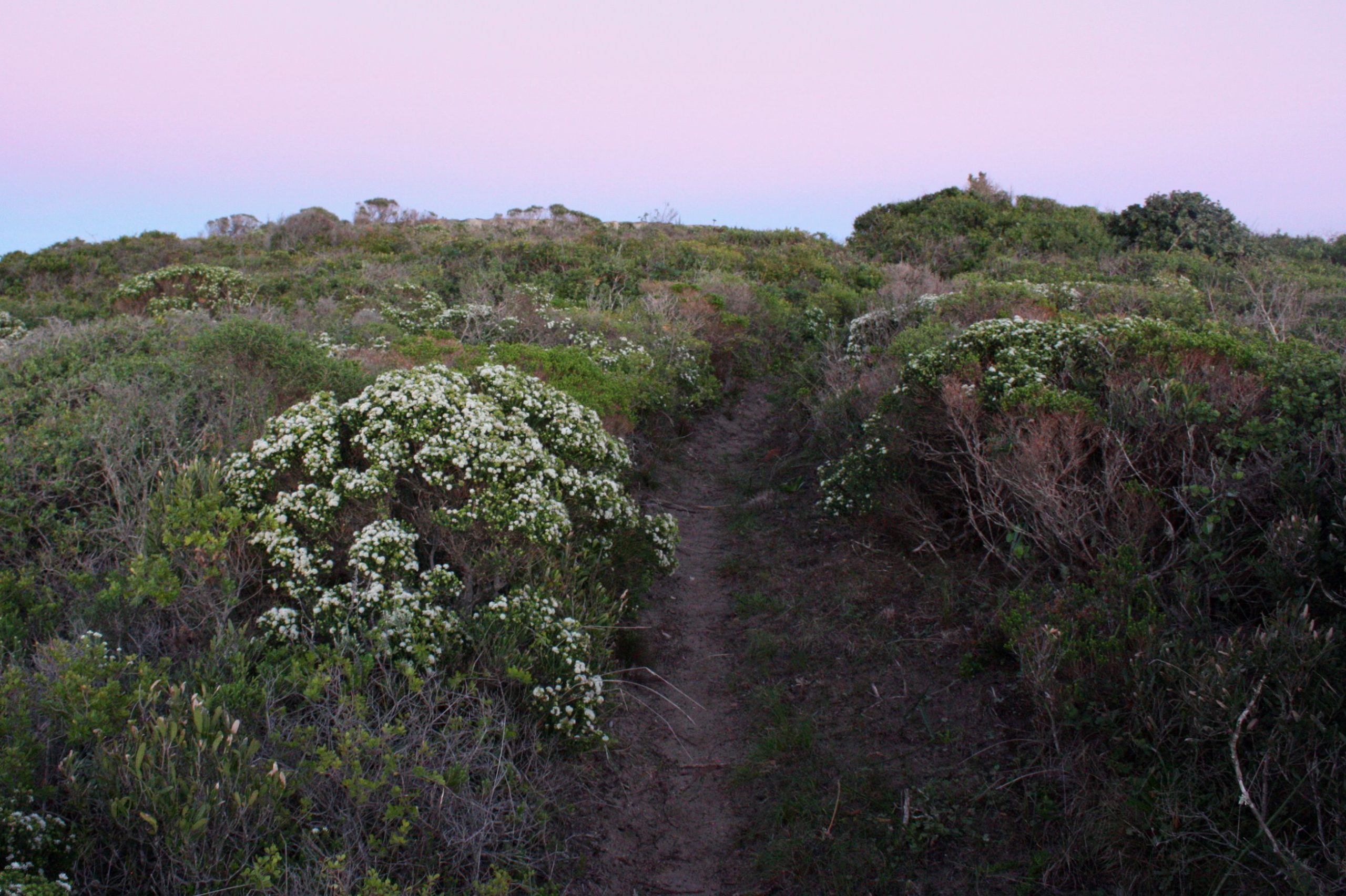 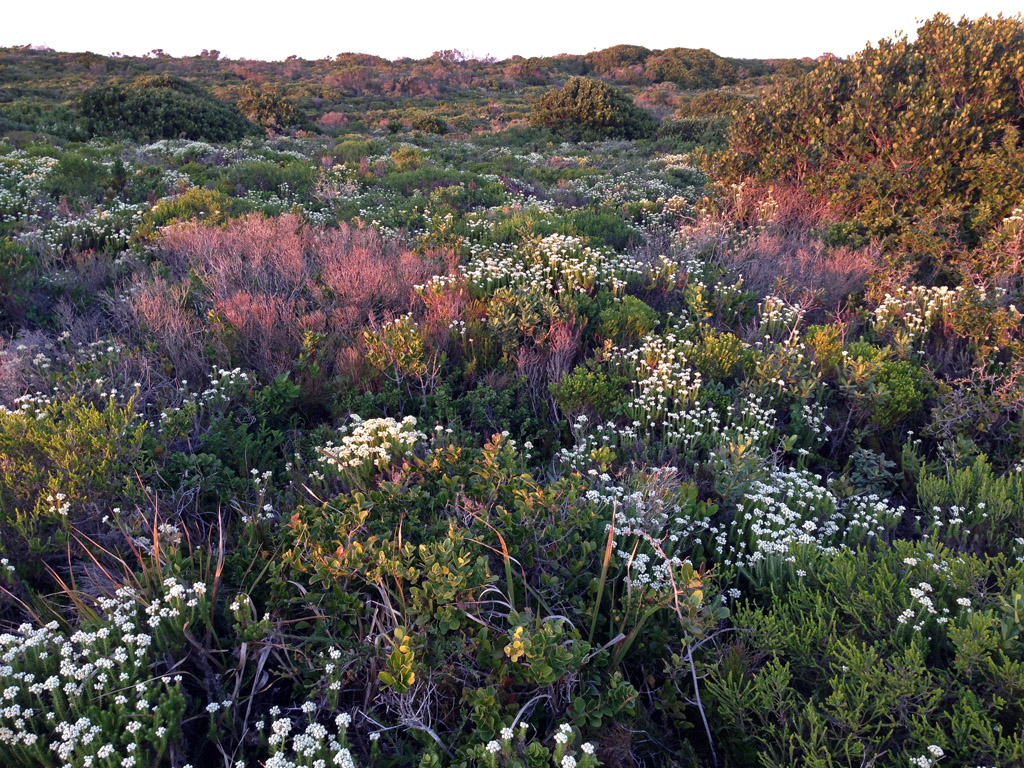 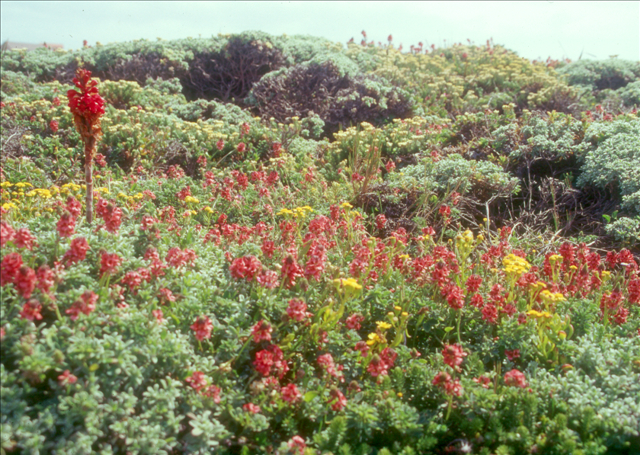 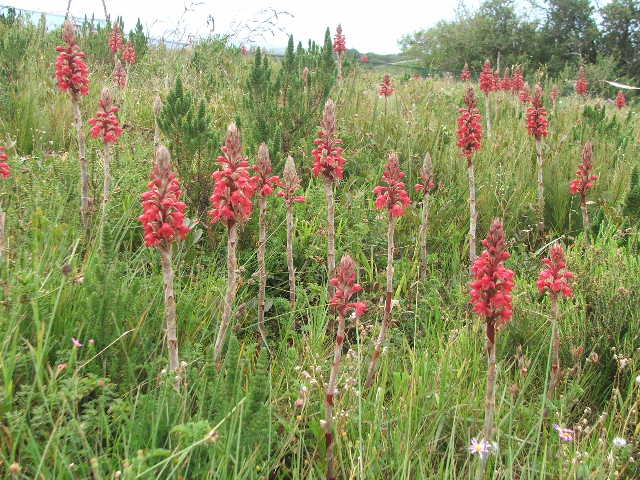 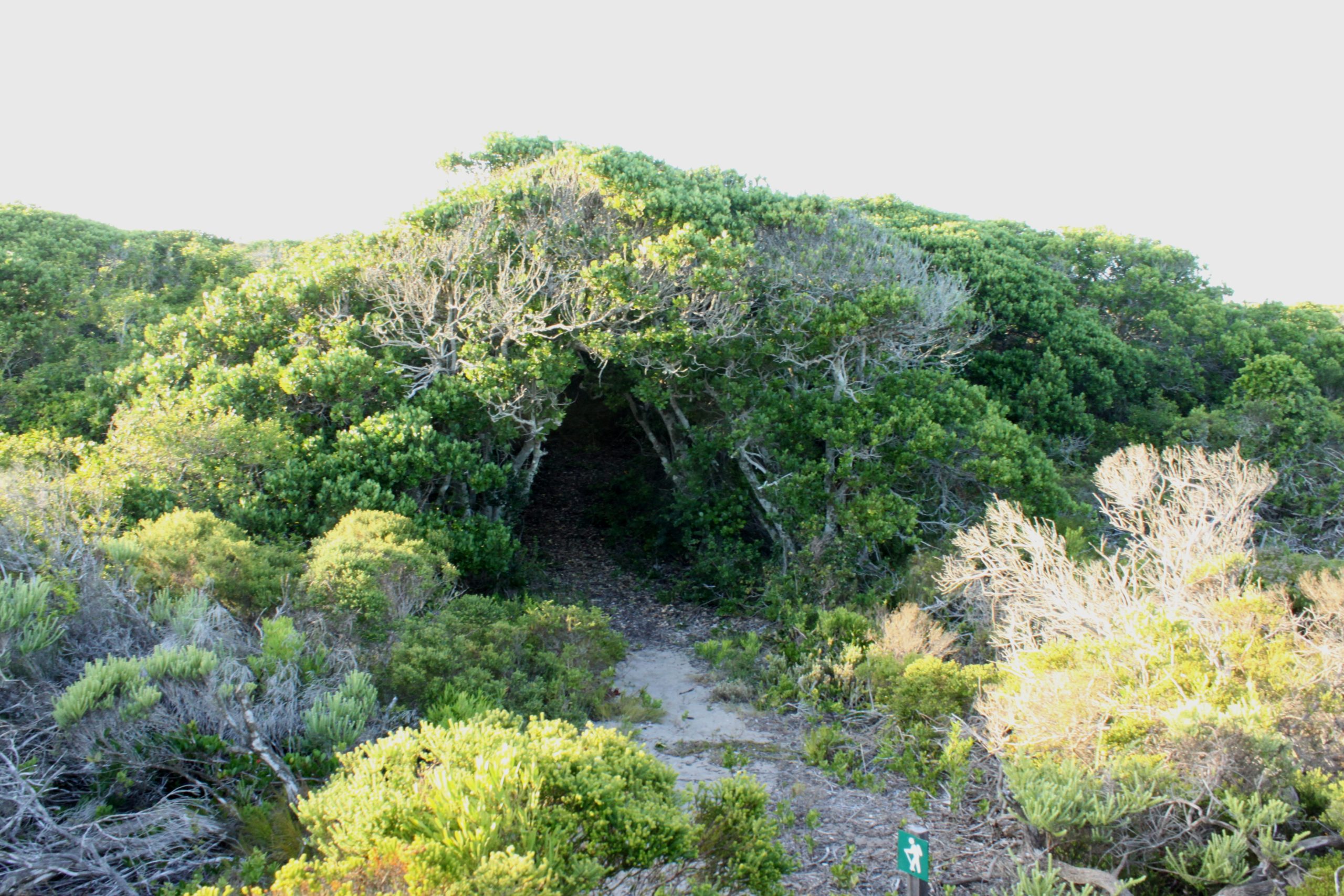