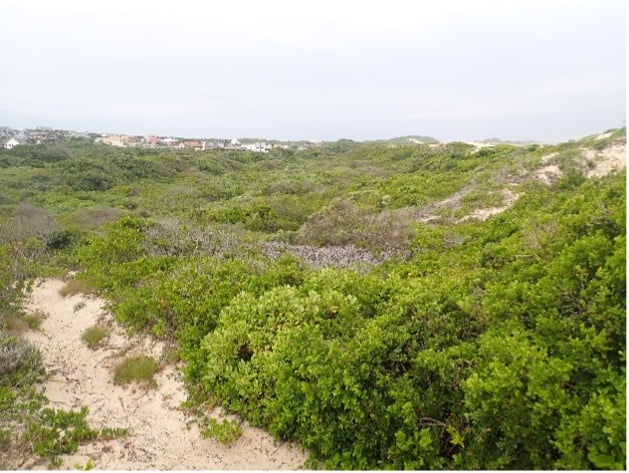 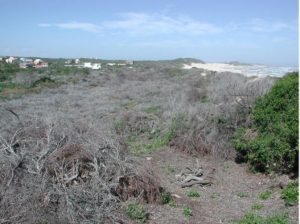 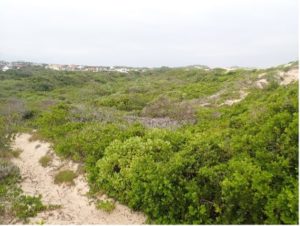 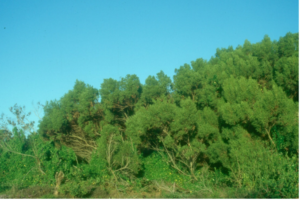 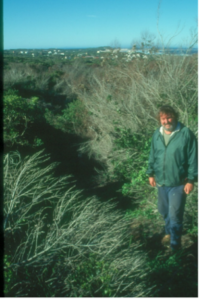 Imagine if FOSTER had not existed these past 30 years. No veld management would have taken place in open spaces around the village. They would have become even more densely invaded by rooikrans, representing a severe fire threat. Indeed, much of the village would probably have burnt down in the fire of Jan 2016, had FOSTER not cleared these aliens in the Irma Booysen Nature Reserve. Photo below from pre-clearing days.

There have also been proposals to develop parts of the reserve system. A light industrial area was mooted for the area adjacent to Osprey Road, and there were plans to extend the village to the north of De Hoop Crescent. The likelihood of something like this happening today is virtually zero; proclamation of the un-proclaimed parts of the nature network by the Kouga Municipality is imminent. This will be the culmination of 30 years of hard work by FOSTER to entrench the legal status of our reserves.

Not only would rooikrans thickets have been a fire hazard, but also a security threat. However, open spaces that support throngs of hikers, joggers and cyclists, and are monitored and managed, are unlikely to provide opportunities for crime.

After the lifting of lockdown restrictions last May, record numbers of people passed our camera trap, up to three times the number recorded in the same months last year. Contact with nature reduces stress, as many scientific publications have shown. We are delighted that the reserves can provide a refuge from the anxieties of living in a complex and uncertain world.

FOSTER strives to be cost-effective in its management of the 330 ha of nature reserve. Operational costs are about R80 000 per annum, amounting to R250 per hectare. How do these costs compare to those incurred by government-run reserves with similar management challenges and objectives? Note that we have excluded salaries from these operational costs as FOSTER is supported by volunteers and pays only for contracted services. Salaries comprise between 30% and 50% of operational costs for government-managed reserves.

The annual management costs per hectare for a similar-sized, dune veld reserve (approximately R7 000 per hectare) is 28 TIMES more per hectare than the FOSTER-managed reserves. However, this reserve is in a major metropolitan area and hosts large volumes of visitors. Another candidate reserve for comparison, also in dune veld and within a major metropolitan area but having visitation rates like the FOSTER reserves, costs – at approximately R1 750 per hectare – SEVEN TIMES more to manage despite being about three times bigger than our combined reserves (costs per hectare decline with increasing reserve size).

FOSTER needs your support. So please, if you want to see these reserves safeguarded and cared for in perpetuity, support, donate and volunteer. Make the Committee’s life easier by ensuring that this group of dedicated volunteers can respond swiftly and effectively to your needs in managing our reserves.

On a final note, the Committee includes members who have served for many years, if not decades. Most will be resigning in the next few years. The younger (35-50-year-old) members of our community must volunteer if they want their children to enjoy the benefits of our reserves.

Membership runs from Jan to Dec.